Everything You Need to Know about Gas Piping

The beginning of October means many homeowners living in the northern part of the country will have to start firing up their heating systems. Natural gas is among the least expensive and most efficient ways to fuel a furnace or boiler. Along with its advantages come safety concerns and responsibilities for homeowners. As a home inspector, it is your job to help identify deficiencies that can compromise the safety of occupants in homes using natural gas. We will discuss some of the basics of inspecting gas piping. 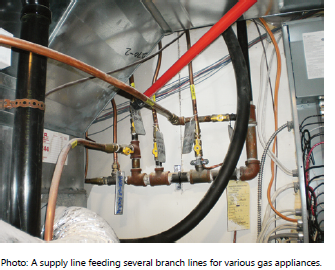 At the appliance connection point, there usually is a sediment trap or dirt pocket, sometimes called a drip leg that includes a nipple and a cap. This pipe extension usually is at least 3 inches long and is intended to catch any water or foreign material that may be in the gas before the material gets into the appliance itself. This is simply a gravity system, with the solids and liquids falling into the pocket. 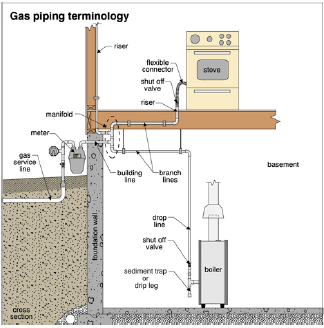 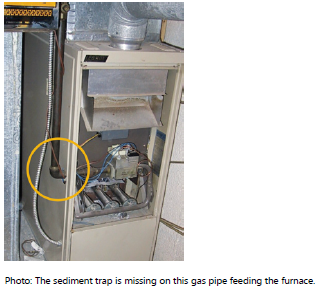 Pipe downstream of meter is homeowner’s 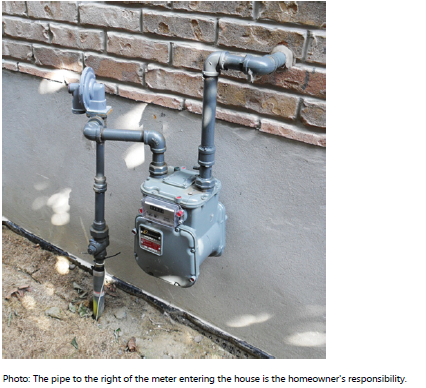 Steel, copper, brass: The most common gas piping is black steel. Galvanized steel, copper, brass or CSST (Corrugated Stainless Steel Tubing) also can be used in some areas, but some utilities specifically prohibit the use of copper. In other areas, the use of copper is widespread. You should know what is acceptable in your area. Steel piping typically is black with malleable iron or steel fittings. Galvanized steel is used in some areas as well. 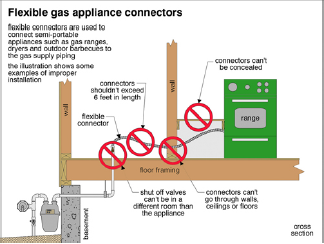 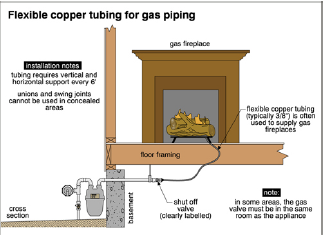 Flex connectors: Flexible connectors are permitted to connect appliances to the gas piping. There has to be a shut-off valve at the connection to the rigid piping. This valve has to be in the same room as the appliance.

Thread seal tape (often mistakenly referred to as Teflon® tape) that is white in color is not recommended as a joining compound for steel gas piping. Cutting oils that remain on the pipe threads from manufacture may prevent the tape from sealing. In some areas, yellow thread seal tape is allowed. Pipe dope is preferred and may be all that is allowed. You may want to check with the gas utility. Ask whether you should report as a defect any piping installations with thread seal tape of any color. 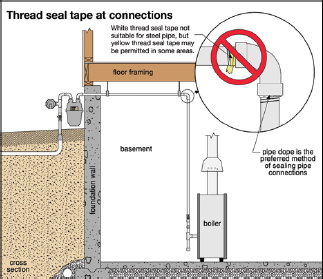 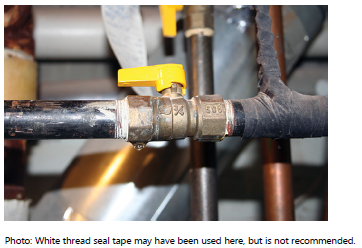 Gas piping can’t be run through chimneys or duct systems.

Although there are some exceptions, most appliances should have a shut-off valve adjacent to them. 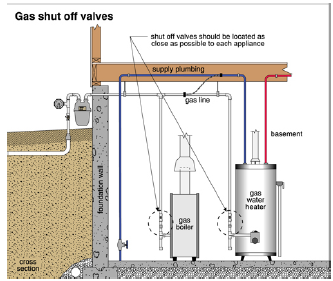 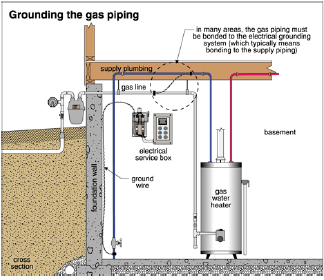 The following problems are typical on gas piping:

The implications of all of these problems are possible gas leaks and explosions.

We have discussed some of the basics of gas piping that home inspectors should have a good understanding of in order to identify potentially unsafe situations. We also have listed ten conditions that are typical when there are problems with gas piping. A detailed explanation on the causes, strategies for inspecting, and implications can be found in the ASHI@Home training program.